The implications for lichens of the spread of Chalara Dieback of Ash, a disease of ash trees caused by the fungus Chalara fraxinea, could be very serious. Ash is one of our most common trees, both in woodlands and as isolated trees in fields and hedgerows. The light dappled shade beneath its canopy is ideal for many of the lichens that grow on tree bark and wood. Like elm, the bark of ash has a relatively high pH, a requirement for many lichens. Several of the more ‘demanding’ species that were severely affected by loss of habitat following Dutch Elm Disease found refuge on ash. Now they are further threatened. The mixed ash woods of northern and western Britain are particularly rich lichen habitats, as are wayside trees everywhere, particularly veteran trees that may be many hundreds of years old.

The following statistics, derived from the BLS database, give some idea of the scale of the potential impact. The database contains nearly 31,000 records of lichens and lichenicolous fungi on ash (Fraxinus excelsior), for 582 taxa – 536 lichens (27.5% of the British lichen flora), 31 lichenicolous fungi, and 15 of the non-lichenized fungi that are recorded by lichenologists. Of these, 220 are Nationally Rare or Nationally Scarce and 84 have a conservation status of near-threatened or above:

A very high proportion, 101, also have a status of International Responsibility (IR), meaning that the British population is considered to be of international significance in a European or global context. Also, 50 are priority species listed within the UK Biodiversity Action Plan (BAP), and 6 are given special protection under Schedule 8 of the Wildlife and Countryside Act (1981).

From a conservation point of view, some of the most important from this list are: 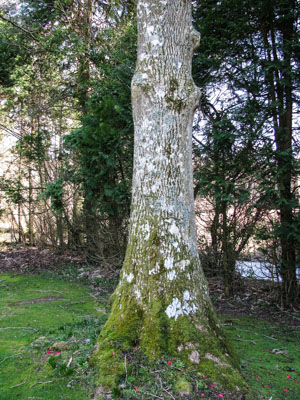 A paper modelling the coextinction risks to lichens on Ash on the island of Gotland, Sweden

Neil Sanderson has posted some useful notes on Chalara Ash Dieback and lichens on the Wessex Lichen Group website. He also includes some links to relevant information.

Ray Woods has reviewed the likely impacts of Chalara Ash Dieback on lichens in Breconshire and Radnorshire.