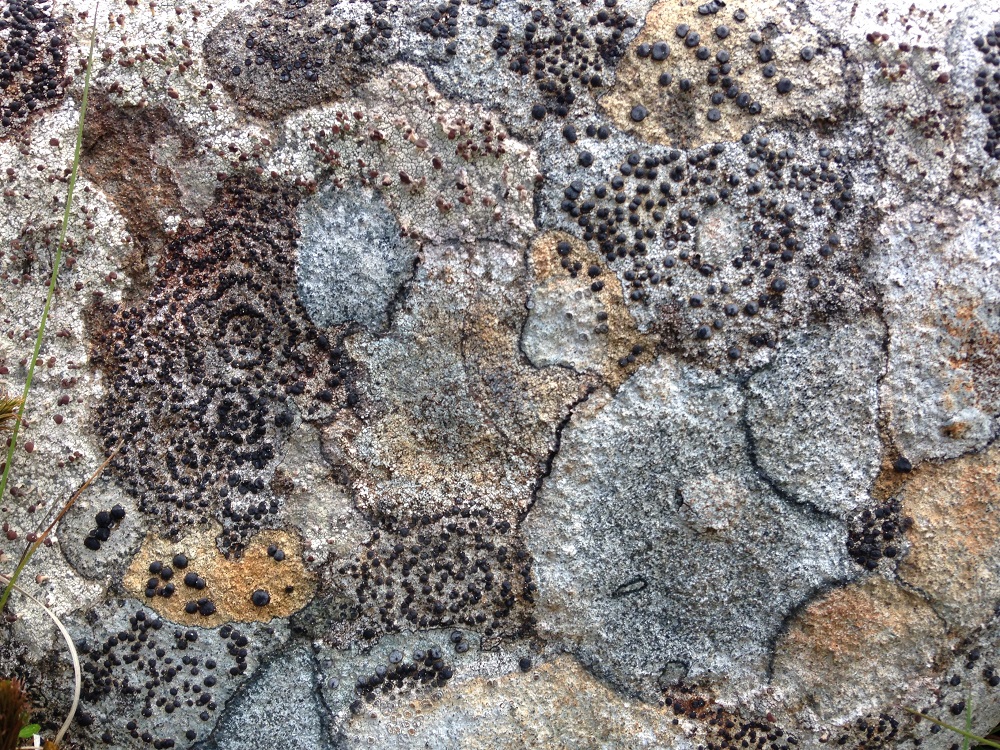 Lichenologists love long words. Not to be annoying or elitist, but as an aid to the precise description of complex structures. Most lichen identification books have a comprehensive glossary of terms but this shorter version may help to get you started. The terms for lichen growth forms and habits are shown separately below. (See also the comprehensive glossary edited by Mark Powell for the Revisions of British and Irish Lichens)

algae (sing. alga) – the photosynthetic partner of most lichens, most are microscopic unicellular or multicellular green algae

cyanobacteria – blue-green bacteria, the photosynthetic partner in some lichens.

photobiont – the photosynthetic partner, an alga or cyanobacterium

apothecia (sing. apothecium) - round or elongate structures with a coloured surface that produces fungal spores, often with a surrounding margin of the same or a different colour

areolate - a crust divided into islands by cracks in the thallus

ascospores – the spores (usually 8) contained within an ascus

ascus (pl. asci) – sac-like cell(s) found within an ascoma and formed during the process of sexual reproduction, containing ascospores

asexual propagules – these contain both the fungal and photosynthetic partners needed for the lichen to disperse without the formation of sexual spores, e.g. soredia and isidia

cortex – a structurally distinct outermost layer of a lichen thallus, usually with no algal cells, present in many but not all lichens

isidia (sing. isidium) – warty or coralloid outgrowths of the thallus, with a cortex and containing cells of the photosynthetic partner and the fungus; frequently these break off as asexual propagules

medulla – a generally loose layer of hyphae below the cortex and photosynthetic layer, often containing air spaces and crystals of lichen substances

propagule – a reproductive or dispersal body containing both the algal and fungal components, i.e. the photobiont and mycobiont

pruina - a fine, white powder like the bloom on a plum

soredia (sing. soredium) – a flour-like or granular ball of cells of the photosynthetic partner surrounded by fungal hyphae; these are produced from cracks or pores in the thallus or on its surface and are asexual propagules.

thallus – the vegetative part of a lichen, containing fungal and algal cells

crustose - crust-forming with only the upper surface visible, growing on or in the substratum

foliose - leafy or flattened, with upper and lower cortical layers

leprose - a diffuse powdery mass with little or no structure

placodioid - crustose but with lobes round the edge

squamulose - small scales, attached at the base, often mat forming

reference specimen – one that has been authoritatively named

substratum (pl. substrata) – the surface upon or within which a lichen grows

vice-county – subdivisions of Great Britain & Ireland used for the purposes of biological recording. They provide a stable basis for recording using similarly-sized units, and although grid-based reporting has grown in popularity, they remain a standard in the vast majority of ecological surveys, allowing data collected over long periods of time to be compared easily. Their boundaries have remained unchanged by subsequent local government reorganisations, allowing historical and modern data to be more accurately compared. Vice-counties in Britain are numbered from 1–112; those in Ireland from H1–H40.

voucher specimen - one collected as evidence of the occurrence of a particular species in a place, or to support another type of data such as DNA or TLC or anatomical slides

aquatic - submerged in water for all or some of the time

maritime - on or close to the shore, within the area affected by salt spray

littoral - on the shore, in the tidal zone that is covered by the sea for part of each day

bryophilous - on bryophytes (mosses or liverworts)