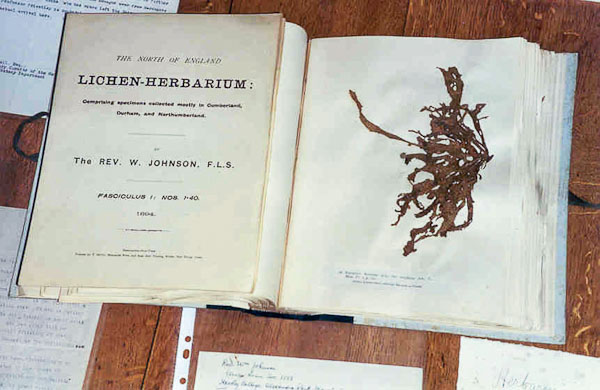 National collections of British lichen specimens are held in London, Edinburgh, Cardiff and Glasnevin, and there are any number of regional and private collections. They serve several purposes.

Worldwide there are 3,900 herbaria with collections that are permanent scientific repositories of specimens. Not all contain lichens, but details of their locations and holdings can be found on the Index Herbariorum. Local museum collections are listed at www.museums.co.uk. If you want to consult any of these collections you should write first to introduce yourself and arrange a visit.

The Society holds an extensive reference collection (several thousand specimens) of predominantly British and Irish species. An indicative list of the current contents of the BLS Herbarium can be viewed or downloaded as a PDF file (see "Download Files" at the bottom of this page).

The BLS Herbarium exists primarily to assist members to develop and improve their identification skills by examination of a range of named specimens. One key way in which it differs from the major institutional herbaria is that members are allowed, where appropriate, to remove fragments for chemical testing or microscopic examination. The Curator greatly appreciates the addition to the packet of a note of the findings, or a drawing or photograph if possible when this has been done.

Herbarium specimens can be borrowed by post, preferably in batches of 10-20 packets, by sending a list of the species desired to the Curator, Richard Brinklow at Dundee Museums and Art Galleries, Albert Square, Dundee, DD1 1DA, email herbarium@britishlichensociety.org.uk. Loans should be returned within one month, enclosing postage reimbursement.

The Herbarium can be particularly useful in assisting beginners to become familiar with the commoner British macro-lichens. Borrowing a number of species from the same genus can, for example, be an effective way to learn both features characteristic of the genus and, by working the specimens through a key, identify those distinctive features that separate the different species.

Another option might be to borrow a number of specimens typical of a specific habitat. One such grouping, added to the Herbarium a couple of years ago, is a set of packets of crustose species all collected from fence posts on the Scottish island of Islay.

The Curator would welcome donations of additional material of species not currently represented. Specimens should, ideally, be of a suitable size to show both the macroscopic appearance of the species and to allow fragments to be removed for microscopic examination. As BLS Herbarium material is for study purposes, it may be used to destruction and for this reason important voucher specimens should be offered in preference to the National or Regional Herbaria.

BM holds around 400,000 lichen specimens including 10,000 type specimens, and about a quarter of these are from Britain. A list of the collections held  is available on the NHM website. Potentially suitable material should be sent to the Lichen Curator.

Cataloguing these specimens is a huge job and the catalogue is still incomplete, but it can be searched on the NHM Botany Collections Database

E holds c. 60,000 lichen specimens, of which 65% are British. They include historical collections and an extensive herbarium (> 25,000 specimens) compiled by Brian Coppins. For more information see the RBGE Lichen Collection web page.

K has the largest collection of fungal reference specimens in the world, around1.2 million including the collection of the former International Mycological Institute. It includes representative collections of most groups of lichens and is particularly rich in foliicolous lichens and lichenicolous fungi. Most of the material collected by David Hawksworth is deposited here.

The main lichen collection was transferred to BM following the “Morton Agreement” in 1969 (Brenan & Ross 1970).

NMW holds 42,000 specimens of lichens and lichenicolous fungi, mainly British. These include much of the collection made by Francis Rose (but not Hampshire).

Making your own reference collection

While the building of large personal collections is not encouraged, for conservation reasons, a collection of your own can enable you to refer back to previous identifications, and to compare your specimens with reference specimens named by experts. Unusual material of common species, good material of critical species, and vouchers for notable species (e.g. those that represent new records) may be added to your collection but key vouchers are best safeguarded by deposit in one of the national or regional collections.

Specimens should be dried, put in a deep freeze for two days, and then kept in a constantly dry place to preserve them. They should be kept in paper packets on which the species name, recorder, date, location with vice county and grid reference), substrate on which it was found, and any other details are recorded. It may be helpful to give them a serial number so they can be catalogued. If fragile (e.g. Caliciales) it should be carefully mounted in a small match box or similar. Lichens on soil can be mounted with PVA glue on a piece of card and put in the small box.

The packets should be stored horizontally in stiff paper folders rather than being stacked vertically in boxes as this invariably reduces them to useless fragments over time.

For more information see Orange, A. (2003), available online on the Collections Gateway.

National collections are increasingly constrained in their freedom to accept voucher material unless it has been collected with the approval of the landowner. You may be required to show proof that this has been obtained.