What is a Lichen? 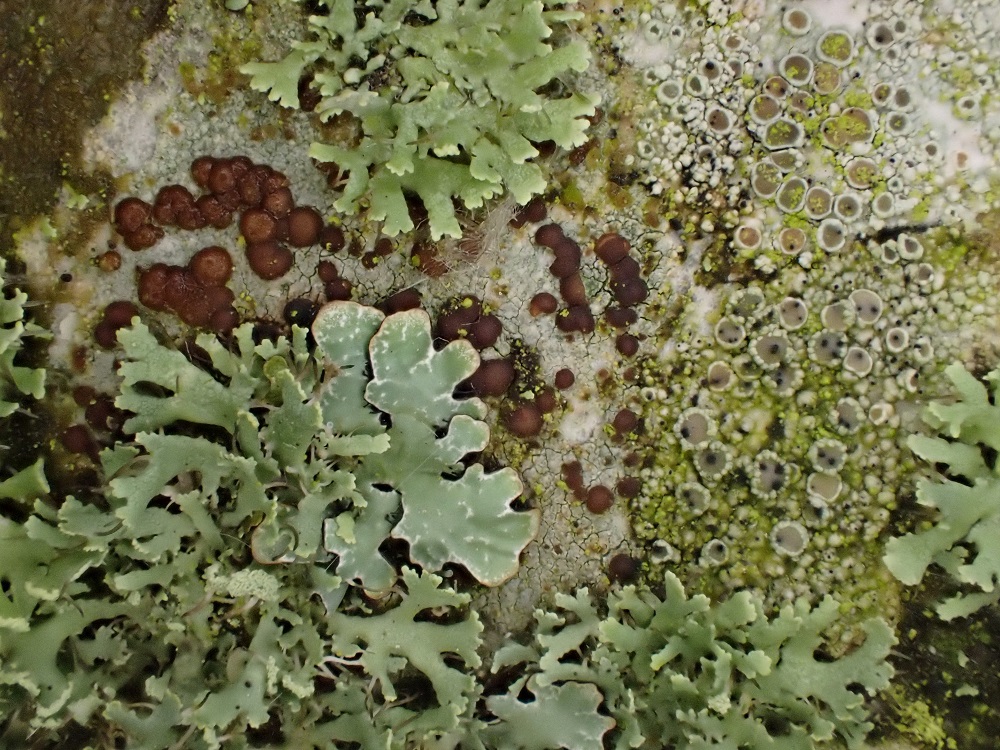 What is a Lichen?

A lichen is not a single organism; it is a stable symbiotic association between a fungus and algae and/or cyanobacteria.

Like all fungi, lichen fungi require carbon as a food source; this is provided by their symbiotic algae and/or cyanobacteria, that are photosynthetic.

The lichen symbiosis is thought to be a mutualism, since both the fungi and the photosynthetic partners, called photobionts, benefit.

Lichens are made up of two or more closely interacting organisms, a fungus, and one or more partners, called photobionts. The photobiont may be an alga and/or cyanobacteria, both of which can produce simple sugars by photosynthesis. In contrast, fungi are 'heterotrophic' and require an external source of food. The fungi build the structure of the lichen thallus, within which they provide conditions for a long term, stable association with their photobionts, the basis of the lichen symbiosis.

There is some debate about the exact nature of the symbiotic association between the lichen-fungi and their photobionts. Are the fungi ‘farming’ the photobionts in a controlled parasitism, or are the photobionts gaining some benefit also? There is good evidence for the lichen symbiosis as a mutualism, in which both partners benefit from the relationship. It is clear that fungi obtain their carbon-source in the form of simple sugars, but the photobionts seem also to be provided with optimal living conditions, in which their populations are often much larger than outside lichens. The photobiont probably also benefits from improved access to mineral nutrients which are provided because of fungal digestion outside their cells. Last, but not least, the interior of lichens is often a place richly infused with complex secondary fungal chemicals found nowhere else in nature, and these compounds are likely to play a role in protection from UV radiation, desiccation, and grazing by herbivores as well.

However, there are also good arguments in favour of the controlled parasitism camp. Up to half of the carbon fixed by algae is immediately converted to fungal sugars which are inaccessible to the alga itself. Secondly, some lichens which can form stable associations with their ‘usual’ host algae, form parasitic-type interactions with non-host algae when grown in the lab. In fact, it is thought that many early stages of developing lichen spores may survive using such a parasitic or saprophytic strategy. Lastly, there are many lineages of lichen fungi that are parasitic on other lichens – the so-called lichenicolous lichens! In some cases, non-lichen fungi have evolved from lichenised forms. These can be specialised opportunistic parasites or saprophytes or even symbionts, competing for nutrients with other fungi in the lichen thallus.

The symbiosis may be more complex than this. Recent work by Spribille et al has found yeasts embedded in the cortex of ascomycete macrolichens, and their abundance correlates with previously unexplained variations in phenotype. There is also convincing evidence for a consistent presence of non-photosynthetic bacteria within the thalli of all lichens, although the role of these bacteria is as yet unknown. Interestingly, a role for non-photosynthetic bacteria was suspected for many years, as the relichenization of separately cultured fungi and algae in the lab was facilitated by the presence of bacteria.

In the early study of lichens, their ‘dual nature’ as fungi with separate internal symbionts was not recognised, and their membership in the fungal kingdom was very much questioned. In fact, a legacy of exclusion from accepted mycological research persisted until the 1970s, despite their obvious affinities with non-lichen fungi. With the advent of molecular biology, the shared history of lichens and non-lichens has been elucidated (and accepted), and we now know that the fungi that form lichens have evolved from many only distantly related lineages across the fungal tree of life, uniting them and their non-lichen relatives in the Kingdom Fungi. Lichen fungi are a heterogeneous group; they are similar only ecologically, in that they share the nutritional strategy of gaining carbon from an internal symbiotic photosynthetic partner, the photobiont. In the study of lichens, the name and classification belongs to the fungal partner, which in most cases is the dominant member of the association, at least in terms of biomass.

Lichen fungi have evolved independently several times within the mushroom-forming fungi and relatives (the basidiomycetes), but much more commonly, from within the cup fungi (the ascomycetes). About 98% of lichens belong to the cup fungi, and it is these lineages that produce almost all of the familiar and colourful crusts, rosette-forming, foliose (leafy) types, and shrubby or fruticose lichens that many people recognise. Probably more than ten distinct major lineages of fungi within the ascomycetes are lichenised. Current estimates suggest that one fifth of all known fungi and half of all ascomycetes are lichenised, with about 28,000 species worldwide. As with most organisms, lichen fungi are most diverse and least studied in the tropics.

For example, the genus Arthonia is comprised of a mix of lichenised and non-lichenised species and includes many which are specialist parasites, only found on one or a few closely-related host lichens. In a single genus, then, we have a case of lichen parasites evolving from lichen fungi! Other non-lichen fungi arose from lichenised ancestors, such as Stictis and Ostropa.

Fungi are classified in part by the type of spore-producing structures they produce, with the cup fungi (ascomycetes) named for the open, cup-shaped structures which often bear the sexual spores of the fungi. Not all ascomycetes have these cup-shaped structures, however, and, easily observed morphological characteristics like fruit type (cup-like apothecia versus flask-shaped perithecia, for example) cannot always be used to assess relationships. Unfortunately, this means that not all fungi sharing a single characteristic are likely to be related. However, some order can be distilled. The bulk of lichen diversity belongs to the class including the well-known genera Lecanora, Cladonia, Parmelia and Peltigera (Lecanoromycetes, or the Lecanora-group), where spores are borne mostly in open or cup-shaped fruits (apothecia). This group of fungi is very old, estimated to have evolved during the Carboniferous period. The very first lichens probably date back to before the origin of land plants, when most of the biodiversity of Earth was in the sea.

Many Arthonia relatives also have open cup type fruits, but their development is quite different, giving a clue that they are not closely related to the Lecanora-group. Instead, they are more closely related to other ascomycetes that have flask-shaped spore-bearing structures (perithecia). Similarly, for still other lichen groups, morphological similarities have been confirmed by molecular evidence to point to their widely disparate origins in the ascomycete tree of life. For examples of these, students would be advised to visit the tropics, where the members of the Arthonia-, Trypethelium- and Pyrenula- groups form conspicuous and sometimes colourful crusts. In Britain, the smooth barked trees of the western districts are good places to see some of our Arthonia and Pyrenula species.

Students of lichenology will probably not be surprised to read that lichen fungi can be difficult to identify, partly due to the paucity of morphological characters to go on, but also due to the repeated and independent evolution of such characters. For example, the fruticose habit has evolved repeatedly within the Lecanora-group, but also within the distantly related Arthonia-group. Unrelated fungi repeatedly evolve similar morphologies to succeed under similar conditions, making morphological identification especially difficult in some groups.

Fungi are heterotrophic, meaning that, like animals, they require a carbon source to survive. The lichen fungi share a common ecological strategy of hosting an internal population of photosynthetic cells, from which they obtain their carbon source in the form of simple sugars. These photosynthetic cells can either be green algae (Chlorophyta) or cyanobacteria or sometimes both, in which case the cyanobacteria are localised in distinct areas of the thallus. As the photosynthetic partners come from divergent parts of the tree of life (green plants vs bacteria), the term photobiont is used as collective term for any of them. The majority of lichens have green-algal photobionts, with only about 10% containing cyanobacteria.

The role of the photobiont in lichens is clear – to provide carbon in the form of simple sugars. These sugars are used by the fungi to maintain physiological functions, to grow, and reproduce. However, in the case of lichens with both green algae and cyanobacteria, the lichen gets an added nutrient input from the cyanobacteria in the form of fixed nitrogen. Although lichens can probably access inorganic nitrogen from the atmosphere directly, it can be a limiting nutrient, so having an internal source can be an advantage especially in heavily leached environments. Lichen fungi can capture a very high proportion of the carbon fixed by their symbionts, immediately assimilating and transforming it into molecules unsuitable for the photobionts’ use.

Only about 100 species of photobionts are commonly found across all known lichens, representing 4 main genera. The vast majority of photobionts are from the genus Trebouxia, followed by Trentopohlia (both Chlorophyta), Nostoc and Scytonema (both Cyanobacteria). Most green-algal photobionts are unicellular green forms, but small colonial types and filamentous algae occur as well. Within the lichen thallus, most photobionts have a different morphology than they would when grown in isolation, so few photobionts can be reliably identified using traditional microscopic methods. Instead, it is best to rely on culturing studies, and more often, on molecular methods, as many different strains have very similar morphology. The jelly-lichens are one exception, where the chain-of-pearls structure of Nostoc is very clear under the microscope.

Recent studies on green-algal lichens have shown that lichen fungi can associate with different photobionts, and we suspect that these ‘choices’ in association occur according to their ecological needs. For example, the same fungal species will use different photobionts in different ecological settings, even within similar geographic areas. Some individual lichens even contain more than a single photobiont strain, a situation that has been better explored in other symbiotic systems. In corals and other marine reef organisms, the animals can regulate the populations of their varying photobionts to maximize photosynthetic output according to environmental variation. Plants are known to regulate their nutritional symbionts as well, by cutting off raw materials they can’t produce themselves – perhaps lichens will be found to be similarly carefully regulating their symbionts.