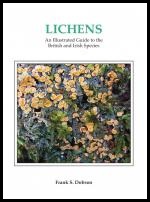 Dobson: An Illustrated Guide to the British and Irish Species

BLS members usually get a discount on the society publications.

Field Studies Council (FSC) publications are available at at their online shop.

The Lichen Hunters by Oliver Gilbert (2004), Book Guild. 208 pp. Tales of derring-do by the early members of the British Lichen Society as seen through the eyes of one of its founders. An agreement has been arranged with Oliver’s family to split the proceeds between a charitable fund and the family.

Lichens by Oliver Gilbert (2000), Collins New Naturalist, Harper Collins. 288 pp. Available as ‘print on demand’ from http://www.newnaturalists.com/, or as a download for Amazon Kindle.

Lichen Identifier (Version 3): A Multi-Access Key to the Lichens of Great Britain and Ireland by Frank Dobson (2007). CD (for Windows but may not be compatible with all versions, check with the author).

All available from FSC and specialist bookshops.

Key to Lichens on Twigs by Pat Wolseley, Peter James & Diccon Alexander (2003). FSC fold-out chart. Lichens are highly sensitive to subtle changes in environmental conditions, so are natural indicators of the health of our environment. This key indicates which lichens are acid-tolerant and nitrogen-tolerant (two of the major pollutants that affect lichens) and also indicates lichens that are associated with unpolluted sites.

Montane Heathland Lichen Guide by Andrea Britton (2008), Macaulay Land Use Research Institute. For hill walkers, naturalists, field ecologists or anyone interested in learning more about the lichens to be found in mountain environments. Printed in full colour on waterproof paper. Distribution maps. Spiralbound, 50 pp. Available to BLS members at a discount if ordered directly from the Macaulay Institute: www.macaulay.ac.uk/lichen.

Lichens on Trees: a guide to some of the commonest species by Alan Orange (1994). National Museum of Wales (out of print).

A Field Key to Common Churchyard Lichens: and to the commoner species found elsewhere on Stone, Fences and Gates by Frank Dobson (2004).

A Field Key to Common Churchyard Lichens by Frank Dobson (2006). 2nd edition. Details 60 of the most common lichens, including species found on stone, fences, gates etc. The keys only use characters that are visible in the field, by eye, or under a x10 hand lens. Spiral binding, 38pp.

A Field Key to Coastal and Seashore Lichens by Frank Dobson (2010). Published after extensive testing by members of the British Lichen Society. Keys use only characters that are visible in the field, by eye, or under a x10 hand lens. Enables the user to identify over 500 species of lichens which are likely to be found on the coast and the seashore. There are also three supplementary keys to Lichens on limestone, concrete and mortar,

Lichens on sawn wood (such as posts, fences or benches) and Lichens on soil, mosses and plant debris. By Frank Dobson. Ring-bound, paperback, 100 pp.

Lichens of Ireland by Paul Whelan (2011). Collins. A5 sized book illustrated with photographs and with flexible water proof cover, describing 258 lichens found in Ireland including species in Atlantic woodlands (Killarney & Gengariff) and hazel woods, the Burren’s open limestone and Rocky seashore. Available via the Lichens of Ireland website.

The Lichen Flora of Cheshire and Wirral by Brian Fox & Jonathan Guest (2003), Nepa Books. Photos by Andy Harmer. The first systematic list for vc 58, an area which has suffered greatly from industrial pollution. Small paperback, 90pp.

The Lichen Flora of Devon by Barbara Benfield (2001), published by Glyn Benfield.

Guides for other parts of the world

Bibliographic Guide to the Lichen Floras of The World (2nd edition) by David Hawksworth & Teuvo Ahti. Reprinted from The Lichenologist 1990 Vol. 22 (1): 1-78). Lists key guides and works by region and country; now in need of updating but still of value.

Lichens of North America by Irwin Brodo, Sylvia & Stephen Sharnoff (2001), Yale University Press, New Haven & London. Covers 1,500 common, conspicuous, or otherwise important lichens from the Arctic to the Mexican border, from coast to coast. One of the most remarkable monographs on lichens ever produced.

(both in German with keys).

Keys to the lichens of Italy. 1. Terricolous species by P.L. Nimis & S. Martellos (2004), Trieste: Edizioni Goliardiche. In English with keys and species descriptions.

The Lichen-forming Fungi by David Hawksworth and David Hill (1984), Blackie, hardback and paperback,158 pp. Now out of print, but covering most aspects of lichen biology, ecology, distribution, and classification; designed for use on undergraduate and masters-level courses.

Understanding Lichens by George Baron (1999), Richmond. An approachable introduction to the study of lichens. Paperback, 92pp.

Lichen Biology edited by T.H. Nash III (2008), Cambridge University Press. Lichens are symbiotic organisms in which fungi and algae and/or cyanobacteria form an intimate biological union. Found in most terrestrial habitats from the tropics to polar regions. Considers the contribution of the unique secondary metabolites produced by lichens to medicine and the use of lichens as indicators of air pollution. Paperback, 486 pp.

Guides to groups or genera

Cladonia: a field guide by Nick Hodgetts (1992), JNCC. An introduction to this widely distributed lichen genus; keys and descriptions for 82 species and varieties. Paperback 39pp.

Pyrenocarp Handbook by Alan Orange (2008). This informal identification guide was originally prepared for the BLS workshop on Pyrenocarps on Rock held at Blencathra FSC in 2006. Can be downloaded as a zip file (6Mb) rom BLS website.

A key to the lichen-forming, parasitic, parasymbiotic and saprophytic fungi occurring on lichens in the British Isles by David Hawksworth. Lichenologist 15: 1-44.

Lichens and Air Pollution by Frank Dobson (2000) FSC. Out of print.

The online BLS Taxon Database of British & Irish lichens is the most up-to-date source for current names, synonyms, and conservation status. The following publications are still available but may now be incomplete or use out-of-date taxonomy:

A Census Catalogue of Welsh Lichens by Ray Woods and Alan Orange (1999). National Museum of Wales

The lichenicolous fungi of Great Britain and Ireland: an overview and annotated checklist by David L. Hawksworth (2003). The Lichenologist 35 , pp 191-232