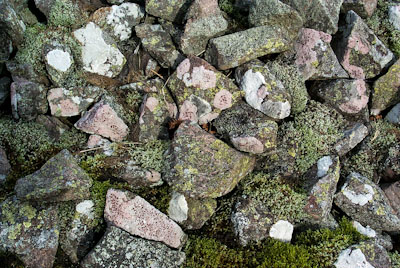 Groups of lichen species are often associated together in a consistent way, forming recognisable "communities". The study of such communities (generally termed "phytosociology") and their use in survey work has not become established (in Britain at least) to the same extent as the National Vegetation Classification (NVC) for vascular plant communities. However, in the same way as the NVC, lichen communities do provide a useful shorthand for discussing relationships and distributions, and potentially a tool for prioritising conservation action (for example, the Lobarion pulmonariae community - often shortened to "The Lobarion" - is officially listed as a conservation priority in Wales).

Vegetation classifications are artificial constructs created to allow easy comprehension of complex continuums. Although it is possible discern patterns where similar combinations of species occur in similar environmental conditions there are no actual boundaries between communities, just graduations. The European phytosociological tradition involves a hierarchical framework that imitates the taxonomy of species, with the association the equivalent of a species. This system has been much criticised in Britain; unlike species classification, where evolutionary relationships provide a theoretical under pinning to the hierarchy, phytosociological hierarchies are entirely artificial. The higher levels of the hierarchy such as classes and orders are fairly obtuse and not much referred to by British lichenologists but the lower levels of Alliances and Associations are of practical use and are utilised in British lichenology.

In the accepted terminology, the higher of these lower level categories are referred to as alliances and have names based on their most dominant or characteristic constituent species, ending in "-ion" (as in the Lobarion example above). Alliances are further sub-divided into associations, with names ending in "-etum". For example, the Xanthorion parietinae alliance includes the associations Buellietum punctiformis and Parmelietum carporrhizantis. The associations are equivalent to the community level in the NVC. To give an ideal of the scope of these levels, in the NVC the alliance Erico-Sphagnion papillosa covers all bogs supporting oligotrophic bog vegetation including both rain fed raised and blanket bogs (M17 – M20) and ground water fed valley bogs (M21) and includes five associations that are normally regarded as quite different habitats by conservationists. The alliance level is quite generalised. Like the NVC communities, associations can be sub-divided into sub-associations.

Lichen Communities in the British Isles

In 1977 a major review volume of "Lichen Ecology" was published by Academic Press, under the editorship of Mark Seaward of Bradford University. This included a landmark paper by Peter James, David Hawksworth and Francis Rose entitled "Lichen Communities in the British Isles: A Preliminary Conspectus". This has become a classic and much cited source and still has much relevance today. The "Lichen Ecology" volume has never been re-published and is increasingly difficult to obtain, but we have obtained permission from the publishers (now Elsevier), the editor and the surviving authors to make a PDF version of the Lichen Communities paper for download.

To view the PDF in your web-browser, click on the link below with your left mouse-button; to download the PDF, right-click and then select "Save Link As" (this phrase may vary depending on which browser you use).

Recent descriptions of the Graphidion (smooth bark communities) and of the saxicolous communities of upland Britain are also available. We hope to add pages on other communities in the future.